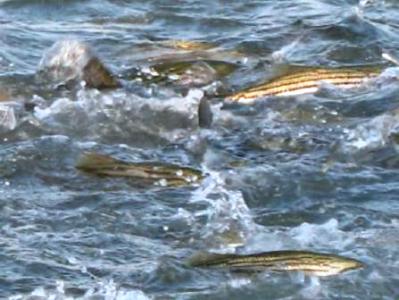 Baltimore Maryland is well known as a saltwater fishing destination. The city offers convenient access to the Chesapeake Bay from Baltimore Harbor and other nearby locations.

Recreational crabbing is also popular on the nearby Chesapeake Bay and its tidal rivers.

Near Baltimore are scores of marinas, tackle shops, yacht clubs, fishing clubs, associations, and other institutions that serve anglers.

Located within a short distance of Baltimore is the Conowingo Dam and Susquehanna Flats. Accessed from the city Havre De Grace, these areas are famous for their outstanding fishing.

Below the dam, a number of species congregate, including blue catfish, channel catfish, striped bass (rockfish), shad, largemouth bass, and others. In springtime, the Susquehanna flats come live as trophy class stripers move in the shallows to spawn.

The shipping channel near Baltimore attracts trophy-class striped bass (rockfish). In spring, anglers troll along the channel for striped bass as they move back down the bay after spawning.

During summertime, anglers also fish along the southern end of the shipping channel edges for bluefish, Spanish mackerel, and other species. Each season is unique, with the northernmost range of fish varying from year to year along the channel.

Again in the fall, trophy striped bass fishing occurs along much of the shipping channel. As striped bass move south, some anglers follow the fish as far as the Virginia line.

Located near Baltimore are a wide range of natural bottom features, including ancient shellfish beds, shoals, lumps, and other structures that attract fish, crabs, and other marine life.

Near Baltimore are several areas where natural rock formations protrude from the water. The White Rocks near the mouth of the Patapsco River have been well known to mariners for centuries.

The massive formation, which can be seen from urban Baltimore, is a familiar landmark to locals. In addition to their beauty and mystique, the massive rocks sometimes shelter schools of white perch.

Smaller rock formations can be found near the mouth of Rocky Creek and at Rocky Point along the Back River.

In many areas, natural oyster reefs have been enhanced by the addition of reef balls, rubble, or other substrates. In the Magothy River, several oyster reefs contain reef balls that attract fish and other marine life.

Several bridges near Baltimore offer fish attracting structure. The Francis Scott Key Bridge is popular with boaters and shoreline anglers. Nearby are bridges over Curtis Creek.

At the west end of Baltimore Harbor, the Hanover Street Bridge provides fishing opportunities for boaters and shorebound anglers. The bridge attracts white perch, striped bass, catfish, and other species.

The Chesapeake Bay Bridge and nearby structures include a wide range of environments where anglers can practice their craft. With its deep water and frequently rough conditions, the main channel is often targeted by large charter vessels.

The Patapsco River is one of the most important destinations for saltwater fishing. Flowing from western Maryland, the Tidal Patapsco passes through metropolitan Baltimore, including the world famous Inner Harbor.

Below the Inner Harbor, the river is joined by Bear, Jones, North Point, Curtis, Stony, Rock, Main, Back, and Bodkin Creeks. Several of these tributaries sustain populations of white perch, striped bass, catfish, and other species.

Other Rivers and Creeks

North of Baltimore, several rivers and creeks offer fishing opportunities. Near Essex, the Back River is a popular saltwater fishing destination.

Along its banks are Rocky Point Park and portions of North Point State Park. Near the mouth of the Back River is Cedar Point and Hart-Miller Pleasure Island State Park.

Just North of Cedar Point is the Middle River. The lower Middle River consists of a network of coves, small creeks, and marshes where a variety of fish and wildlife find refuge.

Also located along the I-95 corridor are the Gunpowder and Bush Rivers. Near White Marsh, a portion of Gunpowder Falls State Park provides access to the Tidal Gunpowder.

To the south of Gibson Island is the Magothy River, another popular fishing spot.

Cox’s Point on Back River and Deep Creek

A MD angler registration is required for anglers fishing without a license in designated license free fishing areas. For more information, visit www.dnr.maryland.gov.